Okay so Umhlanga doesn’t have just anyone leading their campaigns. No, they have champions! 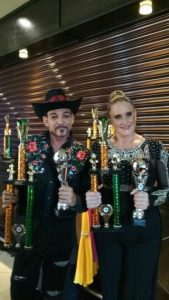 Kevin Ellis, entertainer, style guru and Umhlanga Tourism’s Easter Festival host, is a dance champion. Kevin returned to South Africa on Wednesday 28 March struggling to carry the number of trophies he won at the 2018 European Championships in line dancing. He was placed first in the singles and doubles categories and achieved the highest marks for his performance. Well done Kevin! Kevin will be hosting the Umhlanga Tourism Easter Festival which comprises a Miss Beach Babe pageant on Main Beach from 11am to 2pm on Saturday 31 March, as well as family fun 10am to 2pm on each day of the weekend 31 March to 2 April. The latter comprises games, competitions, fitness for kids and even an Easter Bunny search.

raised R20 000.00 for the SPCA in the recent ‘Honouring Humphrey Big Walk. Well done Humphrey! The walk took place on Umhlanga’s beautiful promenade on a sunny 25 March. Humphrey was accompanied by other enthusiastic pooches (and their owners). For more info on Humphrey’s fundraising efforts, visit Umhlanga Medisport Pharmacy in Chartwell Drive.